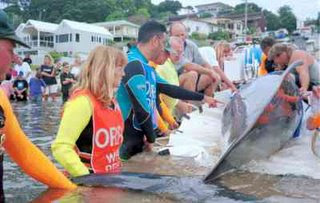 A Whale of a Time

When Kris Madden jumps into her Honda CRV, chances are she’s not off to the office or some shopping jaunt, but making a beeline for a whale stranding somewhere along the New South Wales coast.

Kris is a trained volunteer rescuer, committee member and media spokesperson for ORRCA (Organisation for the Rescue and Research of Cetaceans in Australia).

“Whale strandings are a phenomenon that marine mammal experts still don't know much about,” explains Kris, “Often the animals appear healthy in every other respect, but for reasons known only to the whales themselves, they head towards the shore and are unable to return to sea. Without human intervention, they end up dying on the beach.”