Writers, isn’t it about time we kicked the bucket list?

Sometimes a cliche is thrashed to such a point it transcends even the definition of cliche. The term ‘Bucket List’ is one such overused phrase, beaten to a literary pulp.

Now that this term approaches its tenth birthday, I’m wondering whether those who use it with such gusto even recall its genesis? Clearly the creative geniuses who conceived the Malaysia Airlines promotion in 2014 had lost track of the meaning behind it.

“To enter, customers will need to tell Malaysia Airlines which destinations are on their must-see bucket list after booking their flight” the competition tag-line read. Of course, with two massive tragedies to deal with, references to buckets was less than ideal. Fortunately there were a couple of million astute readers ready to remind them of the folly of their words.

As a refresher to those who may have been living in a cave this last decade, the term ‘Bucket List’ refers to a wishlist of things to do or see before one ‘kicks the bucket’ ie dies.

While it may have been in use prior, the smash hit 2007 comedy movie starring Jack Nicholson and Morgan Freeman propelled it into Cliche Hall of Fame. The two characters, from polar opposite lifestyles, end up in the cancer ward at a US hospital and, to make a long story short, embark on a rampage of indulgence in the short time they have left, visiting iconic locations around the world among other things. 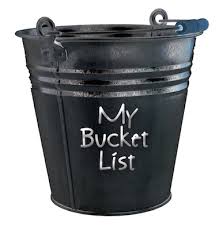 Hence, a ‘bucket list’ should contain items of lifetime significance and not frivolous doodads like a Kardashian handbag or lurid Nike runners.

Barrack Obama, for example, diverted his presidential motorcade while in England in 2014 so he could see Stonehenge, triumphantly announcing to waiting reporters “Knocked it off the bucket list right now!”

“This is the YOLO-ization of cultural experience, whereby the pursuit of fleeting novelty is granted greater value than a patient dedication to an enduring attention - an attention which might ultimately enlarge the self, and not just pad one’s experiential résumé.”

Surely President Obama would rather have had “enact gun laws” or “create peace in the Middle East” on any genuine POTUS ‘bucket list’.

No matter how it appears these days, the bucket list has gone the way of all good cliches and run its course, losing meaning and languishing in the swill of buzzwords and meaningless jargon. Writers, let's consign ‘bucket list’ to the linguistic landfill.