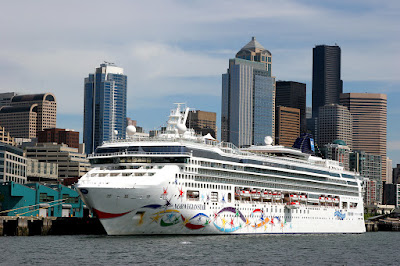 A late starter in the cruising stakes, Seattle is more than making up for it with a visitor-friendly persona and weekly cruises to Alaska and beyond.

“Chop its head off!” “Cut out its guts!” and a lifeless carcass is hurled through the air. No, this is not some sadistic pirate ritual, nor some bizarre black magic chant, it’s the Pike Place Fish Market, one of Seattle’s most talked-about tourist experiences.

The market came about in 1907 when consumers, up in arms at skyrocketing produce prices, turned directly to farmers to eliminate profiteering middlemen and created the Pike Place area as the meeting place. Over one hundred years, the market has grown beyond its original trading mandate, survived several demolition orders and become a tourist attraction in its own right.

Customers order their fish from the ice tables in the front of the stall, the order is called out and the entire fish is tossed to the packer behind the counter who wraps it for the customer. This theatrical procedure draws delighted crowds and there’s plenty of audience participation.

Along the lines of many similar developments at the world’s most cruise-friendly cities, Seattle’s waterfront has evolved to service and entertain the thousands of cruise travellers who pass through the port each season. Yet despite Seattle’s long maritime history, cruise travellers have only recently visited the city of three million inhabitants in any measurable number.

In the mid-1990s, the old Pier 66 was demolished to make way for a brand new Bell Street cruise terminal directly adjacent Pike Place Market in anticipation of the growth in cruise tourism. The optimism was a bit premature and cruise passenger numbers have only grown since 2000 when just six vessels and 6000 passengers used the terminal. In 2005, the new Pier 91 facility at Smith Cove was brought online to accommodate the new superliners and annual numbers now regularly exceed 800,000 passengers and 200 sailings.

Seattle is becoming the jump-off port of choice for US passengers travelling to the neighbouring US state of Alaska, bypassing the traditional port of Vancouver, Canada. Currently Celebrity, HAL, NCL, Princess and RCCL home port 11 vessels there, with Celebrity and HAL using the more conveniently located Bell Street Pier Cruise Terminal at Pier 66. 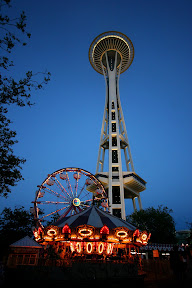 Once onshore, passengers can enjoy an enormous range of sights and attractions. In the immediate vicinity of Pier 66 is the Seattle Aquarium and a bevy of novelty and curio businesses in and around the Pike Place complex including Ye Olde Curiosity Shop and the original Starbucks Coffee Company store. If you have time to wander beyond the pier precinct, there’s plenty to see just strolling the interesting streets. Shopping, dining and drinking are attractions in themselves throughout Seattle and there’s never a shortage of boutique beers like Rogue Dead Guy and Arrogant Bastard Ale at Vons Roasthouse or gourmet coffee at scores of cafes besides the ubiquitous Starbucks.

Head up Pine Street to the classic monorail station where the 1960s-era electric tramway still transports visitors from downtown to the Seattle Center, site of the 1962 Worlds Fair and Century 21 Exposition. The centrepiece of this historic area is the Space Needle, a futuristic tower that is now the signature landmark of this forward-facing city. Aim for sunset for best effect.

If you are embarking or disembarking your cruise in Seattle, the strong advice is to arrive early or stay on to fully enjoy the attractions outside the immediate CBD. Seattle has some superb hotels within a stroll from harbourside like SLH’s trendy Hotel Ändra and the historic boutique property, The Mayflower Park. All the major names are represented too, but it’s these unique, standalone establishments that define Seattle.

Public transport throughout the city centre is free and very reasonable outside that with bus, trolley and a brand new light rail opened in July.

Seattle’s aviation heritage makes it something of a mecca for aircraft buffs with the iconic Boeing Company’s first factory opened there in 1916. There are two sites which must be seen; the sprawling Boeing factory and Future of Flight Aviation Center north of the city, and the Museum of Flight at the old Boeing field to the south. The latter is a magnificent museum with a staggering array of aircraft from every era of flight, while the former includes a tour of the modern Boeing manufacturing facility where you can see the new 787 Dreamliners rolling off the line.

Even a stay of three or four days will leave you wanting for more, so if you plan to spend that amount of time at each end of your seven day cruise, you’ll be assured of complete exploration of this fascinating and futuristic city with a healthy respect for tradition and history.

Space prevents detailing every conceivable option, but consider these;
Seattle is a city where Australians will feel comfortable and at ease. Navigable streets, a sensible transport system, friendly people, great dining and entertainment options, enriching sightseeing and a modern, environmentally responsible outlook that makes for a relaxing and rewarding experience.

Around the World – The Ultimate Cruise?

Many still believed the world was flat when Ferdinand Magellan set out from Spain in search of the Spice Islands of Indonesia in 1519. Three years later, with Magellan himself dead and just one ship and 18 men remaining, the first known circumnavigation of the world was completed.

Such is the allure of adventure and exploration that today, nearly five hundred years later, the thrill of a journey around the world by sea is just as intoxicating and exciting as it was then.

The great ocean voyages are the ones that have defined us as a species.

Perhaps the pinnacle of ancient maritime architecture were the enormous Chinese Ming-dynasty treasure ships of the 15th Century. These wooden leviathans dwarfed the petty craft sailed by Magellan, da Gama and even Cook with the largest of these vessels measuring some 150 metres, over five times more than Cook’s Endeavour. It is now known that vast fleets of these huge ships, and their supporting entourage, ranged throughout the Indian Ocean, stamping China’s colonial authority on lands as far away as South Africa, perhaps even further.

It wasn’t until the coming of the Industrial Revolution and the widespread use of iron and steel before this mark could be surpassed. In 1858, after enormous technical and financial difficulties, the SS Great Eastern was launched. At 211 metres, she was the largest ship ever built and was designed to carry as many as 4000 passengers on transatlantic voyages. Her size was her undoing and after a series of accidents and mishaps, she was finally broken up in 1890.

The 20th Century saw the great ocean liners come of age and the stories of RMS Titanic, Britannic and others are well known. But the story of Cunard’s RMS Laconia has almost faded into insignificance. In 1923, she became the first passenger vessel to circumnavigate the globe, taking 130 days and visiting 22 ports. Built by Swan, Hunter & Wigham Richardson at Wallsend-on-Tyne, she was launched in April 1921 with a gross tonnage of 19,860 tons and a length of 183m. For a relatively small ship by today’s standards, she still managed to carry around 2200 passengers and was one of the first Cunard vessels to exploit “cruising” for pleasure’s sake.

Cruising for pleasure and indeed, world cruising, is now almost commonplace. Yet the vessels undertaking today’s voyages are anything but and are virtual palaces of the sea. Without doubt, the most prestigious world cruiser is Cunard’s newest Queen, the Queen Mary 2. She preserves all that is traditional and romantic in a great ocean liner without compromising luxury or prestige. In September, Cunard adds the MS Queen Elizabeth to its regal fleet as a sister ship to Queen Victoria and in January 2011 she sets sail on a 103-day World Cruise. She will be the third glamorous liner to bear the name.