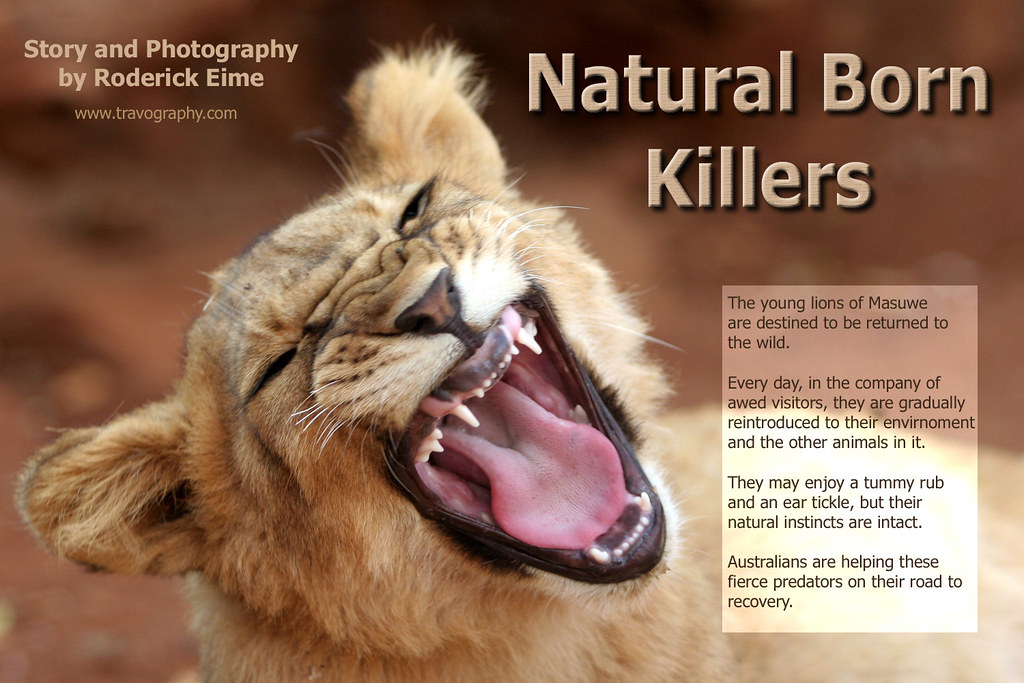 I could just see the young male’s eyes through the long grass as I focused my telephoto lens onto his face. The lion looked relaxed, satisfied and comfortable reclining on the grass barely 20 metres away. Click!

That tiny noise was enough to catch his attention in the silence of the savannah and he quickly turned to look me straight in the eye. My heart rate immediately shot up, but the next event completely took my breathe away. Lokuthula, the 16-month-old, 90kg African lion, stood to attention and begun a full charge with me as the target.

I reeled back in terror as the carnivore bore down on me. I’m a goner for sure. “No, cub!” yelled Paul, my guide, nudging me aside and standing in front of the lunging beast. “Stop!” he ordered, pointing a flimsy stick to the ground in front of the excited cat. Lokuthula, amazingly, came to an abrupt halt, looking imploringly at Paul and wondering why he was spoiling the fun.

Gasps turned to guffaws as the rest of the group realised the danger was passed and Paul was soon reassuring Lokuthula with a vigorous tummy rub. Langa, the twin, was also quickly on the scene for some attention while I stood, still quivering, relishing my “near death” experience.

When I was told we’d be walking through the bush with some lion cubs, here’s me thinking of little fur balls rolling and frolicking in the grass, nibbling each other’s ears. But these two guys are no cubs! At almost 100kg each, they’re about half grown and ready to start tearing into the other animals on the reserve.

“You must not show fear,” Paul reminds me of the briefing at the start of the tour, “and if he charges, you must stand your ground and say ‘no’. They are still cubs and just want to play. But they play rough and don’t realise they will hurt us, so we must stop them.”

Okay, I promise, next time a lion is about eat me, I will stand firm, look him square and chastise him sternly.

Zimbabwe’s Masuwe Lodge, near Victoria Falls, is unlike many of the surrounding big game reserves in that it has an active wildlife rehabilitation program. Volunteers from all over the world can come and take part, assisting with guided walks, feeding and exercising the animals. Masuwe is stage one in a four stage process of captive breeding and release that can take several years and is managed by the African Lion and Environmental Research Trust (ALERT) with Sir Ranulph Fiennes as its Patron. 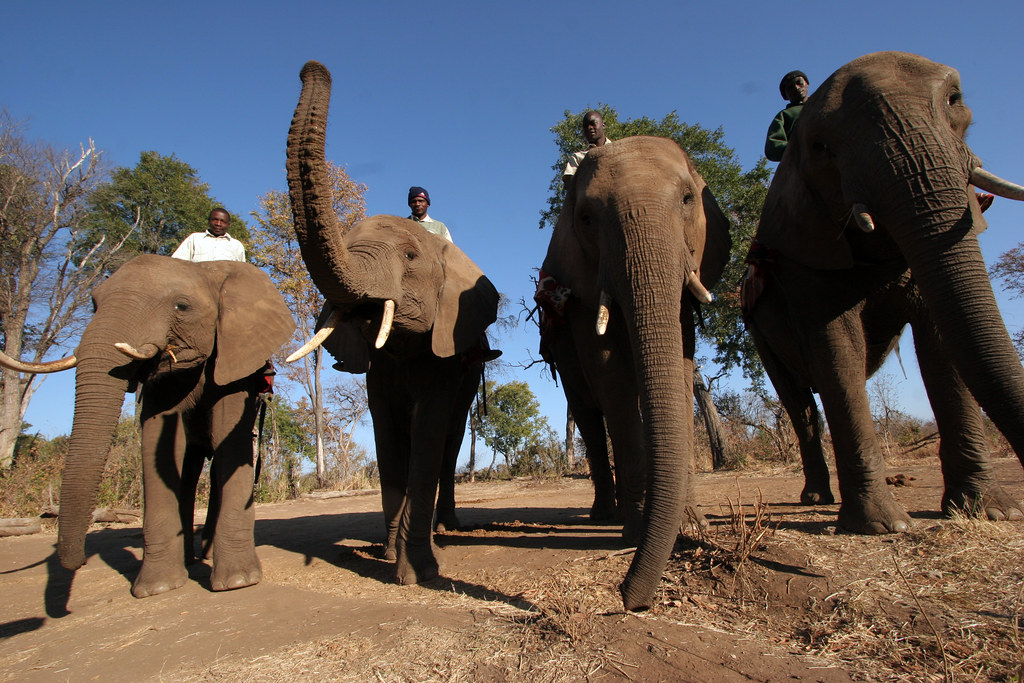 Masuwe’s other attraction is elephant back mini-safaris, where you can ride aboard one of their tame African elephants for a few hours observing the wildlife from a much more confidence inspiring viewpoint. Unlike their Asian equivalent, you won’t see chains or rough-handling, African elephants only respond to kindness!

Access to the lodge is by car or minibus from nearby Victoria Falls township with accommodation in room-sized, safari-style tents. These are comfortable and sturdy, but are still open to the outside in places, so you must be diligent in keeping food hidden from prowling monkeys and sleep secured behind your supplied mosquito net.

Meals are served in a sheltered pavilion on a small hill overlooking a waterhole that ensures you are still in touch with the wildlife in between courses. Just as dessert was served, an almighty ruckus erupted down by the pond. Two tribes of elephants were engaged in an angry dispute over momentary water rights. Trumpeting and mock charges ensued for almost fifteen minutes while the mothers and their babies took to the water as the bickering males were occupied in jousts. Afterwards as I lay in my tent bed, I was disturbed by the occasional crashing of a nearby tree as one of the groups went about their midnight snacking.

In the morning the call rang out: “The boys have made a kill!” and I dashed breathless into the bush with my guide to see the two “cubs” ripping shreds off a water buffalo they brought down just moments before. Lokuthula had the poor creature in a vice-like neck bite, but his under-developed teeth meant the kill was slow. It was an agonising sight to watch the bull kick helplessly as Langa fed unperturbed. Such is the law of the jungle, I’m just glad it wasn’t me.

Our single-night stopover at Masuwe was just part of a larger exploration of the Victoria Falls region. The balance of our stay was at the glorious Victoria Falls Safari Lodge, a magnificent luxury lodge in true wild African style and just four kilometres from the roaring Zambezi waters. The Conde Nast Gold-listed, multi-award winning property gets consistent four to five star reviews on Tripadvisor.com, not the least because of its dramatic location overlooking a busy waterhole that attracts elephant, antelope, wart hog, all manner of birds and the occasional lion – and all this just a short drive from town!

If you’ve read this far, you’ve no doubt asked yourself about travel to Zimbabwe and the moral and ethical entanglements. This writer is not about to preach one side or the other, but I can inform prospective travellers that at no time during our stay were we confronted with desperate poverty or hardship, begging or aggressive touting. Regular townsfolk just want to get on with their lives and were happy to do business with the encouraging number of tourists in town. Tourist Police are installed to ensure visitors are not subject to overenthusiastic commerce.

Most of the tourist operations and lodges will trade in US dollars and visitors should avoid Zimbabwe dollars for anything except souvenirs. My son’s eyes popped when I calmly handed him Z$0.25 Million when I got home (Value: about US$1.00).

Although many travel agents and tour operators are switching to the equivalent Zambian product across the border, I can see no reason why the Zimbabwean goods should be in any way inferior. The beer is cold, the steak is magnificent and my postcards all arrived. The lodge is able to import supplies directly from South Africa with foreign currency and this ensures the many staff and their families are also properly fed. Although I had my reservations throughout, I honestly felt my visit was of overall nett benefit to the Zimbabwean people.

The village of Victoria Falls has its own international airport where we arrived directly from Johannesburg with South African Airways. Customs and immigration procedures were surprisingly efficient and our visa (US$30 cash) was processed on arrival.

Outside a pre-arranged itinerary, there’s still plenty to do. Shearwater Adventures offer an exciting range of adrenaline adventures ranging from mild to wild. A helicopter ride over the falls is a must, or else there’s bungy jumping, jet boats, Zambezi River safaris, rafting or canoeing.

Be sure to stop by the delightfully colonial outpost of the Victoria Falls Hotel for an ice cold Zambezi Lager. Opened in 1904, this hotel has always been the place to stay for great white hunters. Now a member of The Leading Hotels of the World, a standard room will set you back about $300, including breakfast.

Highs: Close encounters with the wildest wildlife will leave you changed forever. The scenery and adventure possibilities are only limited by your imagination.

Lows: Don’t forget the aeroguard and be sure to secure doors and windows at night from marauding primates looking for morsels. You make your own decision about the ethics of travel to Zimbabwe. I made mine and have no regrets.